When can I restart my baking

Its a long while .. since the CNY .. so many goodies to finish and just me to do it (oops) .. then now my kids are sick .. looks like it gonna be another week before I can start baking. I have yet to try out the CNY peanut cookie .. ingredients bought before CNY .. cant imagine I have another round of CNY goodies to finish.
Posted by sherlyn at 2/24/2009 10:16:00 PM 4 comments:

This dessert recipe came from Simply Her Aug 2008 magazine. Again, I made it because I have to finish up my whip cream and the packet of couverture chocolate. The couverture chocolate is bought wrongly and my friend told me it can only be used in making fondue. So when I came across this recipe that requires this ingredient .. I quickly make use of it.

I do not know what is this but by reading the recipe, it seems like making an ice cream or mousse. The definition from the wikipedia is here. Its a frozen mousse to me after I tasted it.

Here's my cold dessert in a bowl top with crushed hazelnut and chocolate rice. 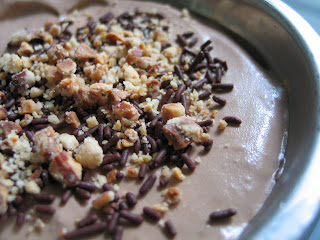 This dessert is very very sweet ..... so, for those who likes sweet cold dessert .. here's the recipe.

I must jot this tip down before I dispose my magazine. This tip is from Simply Her Jul 2008.

This tip is contributed by Tan We Ee as written on the magazine and the writer of this section, Lim Tsiao Hui even tested the tip and said that this tip works, and that its quick and fuss free. All the oxidised silver pendant and necklaces regained their sparkle immediately.