A matching earring for my pearl sandwich necklace

I have the intention to wear my "sandwich necklace" for a wedding coming up in Nov, so it cannot go with my current silver earring. I do not intend to have a pair of earring that looks the same as the necklace, so I just use the same colour theme and I match the pearl (that I used in the necklace) with a black drop bead. Here goes :- 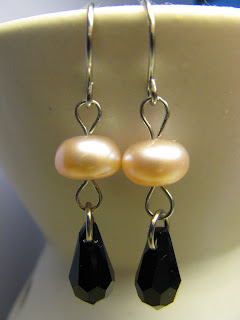 Not very satisfied, but will do for the time being. The loops are too big, thus seems to make the earring "very empty" (wonder if you will understand). I do have one or two other variation in mind, but has no pearl pressence. So if only black, wonder will it be seen when my hair is hanging down.
p/s : Can you see the flaws? (the difference size of the loops is a big giveaway, not counted)
Posted by sherlyn at 9/09/2009 11:01:00 PM No comments:

My third loaf from Breadmaker 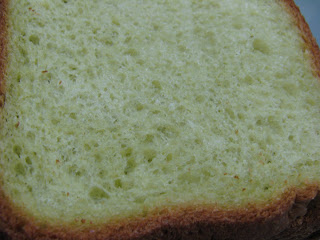 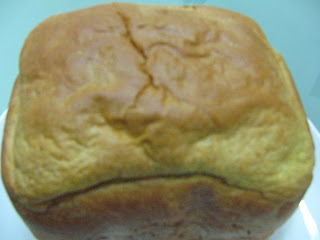 To use up the frozen pandan juice, I made the pandan bread again. This time I used the new brand of yeast, use pandan juice instead of coconut milk and remember to add pandan paste (instead of essence, because I don't have).
Normally, with my skills, I do not venture far from the recommended recipe, but this time, I just want to use up all the frozen pandan juice. With the new yeast, my hubby says there is still a slight hint of sourness .. anyway I did not detect anything.
This time, the bread is softer than the first try. Not sure if it is due to the egg. My kids are having chicken pox, so cannot consume any eggs, thus I just empty the whole egg into the mixer bowl, a total of 46g instead of what is asked for. The bread looks bigger as compared to the first time too. However, I just can't seem to get a smooth top.
By the way, anyone know what is the difference between pandan paste and pandan essence?
你認為我做麵包上癮了嗎？ 不是啦。是我懶。用麵包機做麵包，就好像煮一鍋熟的餐。全部材料倒進去，開機，按鈕，等三小時，就有麵包吃了。這次沒用椰奶因為想用完椰水。 蛋也多過食譜寫的。這次的斑蘭麵包比第一次來的軟，也比較大。新鮮的麵包一定好吃的。
Posted by sherlyn at 9/08/2009 01:34:00 AM 5 comments:

My second loaf from the breadmaker

Happy with the first loaf, I continued to make the 2nd loaf. This time a chocolate flavour one, because it is my boy's favourite. I took the recipe from HappyHomeBaking again, Chocolate Hazelnut Bread.
She mentioned in her post that she bought the wrong type of hazelnut (grounded instead of chopped) but I like to use grounded hazelnut because I know that my family (accept me) cannot accept a bread with nuts.
Previously, I am using Red Man Yeast but my hubby thinks that the first loaf that I baked has a hint of sourish taste, so I am determine to change the type of yeast, from RedMan to Bake King (since it is readily available at the nearby NTUC).
This Red Man breadmaker only allows me to choose the crust and type of bread, so basic and light crust is what I have chosen, thou I know the crust will turn out not light!
At the end of 3 hours, I got this. 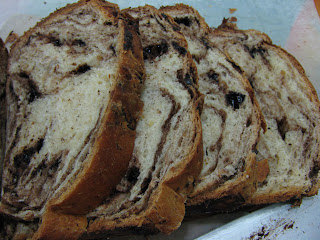 I love the look of the bread, the inside but not the outside. I still do not have a smooth top. Is it the standard for breads out of breadmaker? The bread is still soft, but the crust is cripsy then when cooled, chewy. Anyway I love this bread. The chocolate inside makes it so tasty and I love the little bits inside. My girl ate it while it is fresh and said is nice, hubby also say its nice (but he doesn't like the bits), but my boy got chicken pox and has no appetite. Anyway, on 2nd day, no one asking for it. it is a little drier.
According to the manual of this breadmaker, the liquid ingredients will go first follow by the dry ones, then butter, but this recipe calls for melted butter and it is liquid ... so shd it be first, or last? In the end I put it in last, since i m going to turn on the maker right away.
It was after that then I realized I may have added the hazelnut in the wrong order. Hazelnut can be considered as "other ingredients" that should only be added after the 2nd kneading, but I put it in together with the dry ingredients. I wrote to ask HappyHomebaking for advices. She mentioned if the hazelnuts are grounded to very fine, I can add in with the flour. If it is in bits, adding it too early might make the dough dry as it may absorb up the moisture. If I ever had the chance of baking this bread again, I hope I remember to add the hazelnut in later.
很高興上回的麵包不錯，所以乘勝追擊，再來個巧克力口味的。
Posted by sherlyn at 9/05/2009 12:06:00 AM No comments: