There are nothing for breakfast tomorrow and I am not willing to buy bread today as I am doing marketing tomorrow, so I quickly took out the magazine that I have renewed  a couple of times just because I have not tried out the few recipes in it. There are 3 recipes I wanted to try in this Australian GoodFood Magazine but I only have most of the ingredients in one recipe - Triple Chocolate Fudge brownies.

Look how tempting this recipe is with this picture from the magazine. 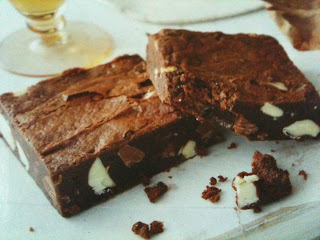 I marked down this recipe due to the flaky top. I once baked such a brownie but I lost the recipe. However I did not achieve that and I cannot even explained what happened during the whole baking process when it is such a straight forward recipe. Perhaps I should not have meddle any single bit of the process and ingredients.
First, I replaced some white chocolate with cookie and cream chocolates I got from my Perth trip and I even reduced the amount of white chocolate. Then I used chocolate chips as milk chocolate. As the sugar is added into melted butter so I used normal sugar instead of caster sugar as I guessed they will melt anyway. I also reduced the sugar to 50g since my cookies and cream chocolate is very sweet. I also beat the eggs vigorously instead of lightly as instructed because I was thinking of adding more rising power to the brownie (LOL). Perhaps I am all wrong....
The mixture became like a dough. It did not even stick to the sides of my pot. I felt that if I did not reduce the white chocolate amount, I will get an even firm mass of batter. 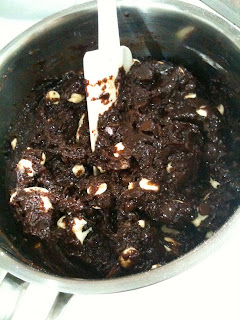 I have chosen to try out fan mode again. Actually I am not too sure if the mode called "turbo" on my oven is the same as fan mode. The manual said that "convection makes hot air circulate around the food ..." so doesn't that sounds like fan mode? Anyway, halfway through the baking process, the cooking in process batter turned to this below - 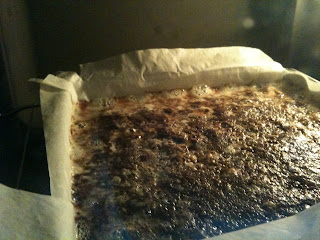 The surface has alot of oil, all bubbling. I am not sure why is that so. When baking time is up, I see that the top did not achieved the flaky look, so I turn on the top heat and wanted to dry up the top. This process went around 3-5 minutes. In the end, the brownie seems kind of dry but I still did not get the flaky top. The kids like it thou. I guess it will go well with vanilla ice cream like my friend suggested. Presenting my dry top brownie :-) 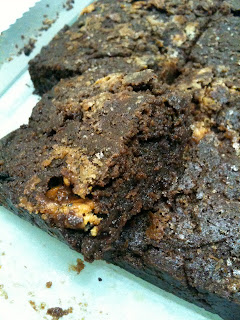 1. Preheat oven to 180dC or 160dC fan. Grease and line a 20cm square cake pan.
2. Place butter and dark chocolate in a small saucepan on low heat and stir until melted. Stir in sugar. Cool for 10 mins.
3. Stir in egg, then flour, and then white and milk chocolate. Spoon mixture into prepared pan. Bake for 20 - 25 mins, until firm to touch, Cook in pan. Cut into 16 squares and serve.

So simple and yet I did not make it. Haiz. I think I will find a time to try this again, follow to the perfect T (but really worried about the sugar and the sweetness).

If there are any health concious readers, the following information that came with the recipe would be helpful to you (but not me :-( ) -