I baked this before, but couldn't find the entry, so I guess I may have did it before the birth of this blog. The post it slips with comments sticking on the recipe page should be sufficient to support my guess.
The comments mentioned that the cupcakes were bitter so this time round I only reduce the sugar by 20g (it was a 50% reduction previously).
I was lazy to do the washing of the mixer so I manually whisk the eggs, butter and sugar so now I still have an aching arm even though the cupcakes are done beginning of last week.
I baked two batches because the first batch is polished up on the same day and my kids still ask for more. However, the 2nd batch took 3 days to finished, perhaps due to the additional choice of cheesecake which I baked the same day as the first batch. I did not do any icing this time, even though I originally wanted my kids to decorate the cupcakes. I only added white chocolate droplets into the first batch and let them sprinkle on some sprinkles on the 2nd batch.
The cupcakes are really tasty (to me) since they are chocolate flavour. Spongey on the inside and a little crispy on the crust.
Here's how mine looked. 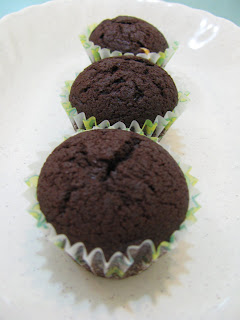 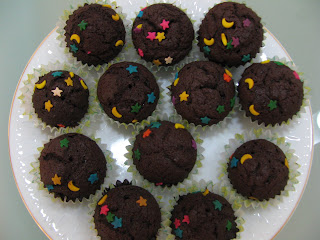 Steps :-
1. Preheat the oven to 190dC/375F/Gas 5. Line 18 buns tins with foil or paper cases.
2. Sift the flour and cocoa into a bowl. Add the butter, sugar and eggs. Beat until smooth, then stir in the chocolate chips.
3. Divide the mixture between the lined bun cases. Bake in centre of the oven for about 15 minutes, until the buns spring back when lightly pressed. Remove the buns to a wire rack to cool.
4. To make the icing, beat the butter with the cocoa, milk and icing sugar until smooth.
5. Spread over the tops of the buns and sprinkle each one with a few chocolate buttons. Leave to set for 30 minutes before serving.

p/s : Oh, I found the picture I took of my previous chocolate cupcake attempt. They are done in Aug 2007 with a couple of other bakes like the doggie biscuit and some lemonly stuff. Now I miss my doggie biscuits.