I am very happy to be able to fulfil my wish of trying out this recipe from Blessed Homemaker. It is a baked cheesecake recipe using NOT philly cheese but sliced cheese. I am sure parents with kids will always have sliced cheese in their fridge.
I read about her try on this recipe for a few times, even the comments, and finally 鼓起勇氣, have it done last friday afternoon when the boy is not having school (due to PSLE oral). Blessed Homemaker doesn't have problem in getting the cheesecake done in a short time, but I almost took an hour, from measuring all the ingredient to putting the final product into oven, that includes whisking the 4 egg whites with my hand whisk. *sigh* really regret not using the mixer... 4 egg whites! So tiring, but I manage to have medium hard peaks (but egg whites did not fall when I turn mixer bowl upside down) after like 10 - 15 minutes with lots of short rest in between. My arm ache for 3 days after that, and I even have problem brushing my teeth. (goes to show how much exercise I lack)
I have to note, when sifting the flour inside the egg, milk, cheese, butter mixture, I can see specks of flour floating around, so I do worry about getting balls of flour in the end product, but luckily, no, no trace of flour. :-)
Blessed Homemaker advise me to lengthen the baking time since I am using a 8 inch pan. As I see dark patches forming, I did not follow the recipe's 20 minutes 170 degree Celsius. I only bake 15 minutes and turn it down to 140 degree Celsius and further bake the standard 40 + my extra 15 minutes.
The cake rose beautifully in the oven after 30 minutes. See this. 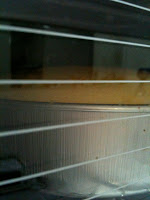 Finally, I off the oven and wait for it to cool inside ... and also to see it shrinking from the sides, sinking as well and ended up like this. 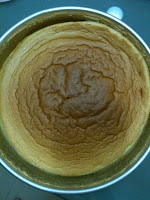 So sad ... I am already expecting Kueh, not cheesecake, but after I cut, hmm still look reasonable ok, and very tasty. As expected, the cake has a dense layer at the bottom (caused by the sinking) and that layer taste saltish, but my kids say it is still tasty. My hubby even volunteer to share the last piece with me cos he feels that it is tasty. The cake is all eaten up on the 2nd day. I think I have to try again, using the KA to beat the whites. However, I still feel that my skill of folding the whites into the batter needs lots of practicing. But I like the idea of using balloon whisk to fold in the whites. Let's hope I get the time to try again.
Sharing with you how the "cheesecake kueh" looks like. 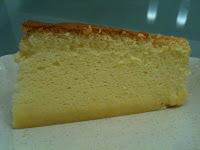 Based on my limited knowledge, there are a few possibilities for kuih like bottom:

1. didn't mix well when folding in beaten whites
2. if the egg white is over beaten, it will not blend well with the cheese mixture and thus a kuih like bottom
3. waited too long before you bake, cake mix may have separated.

Oh, forgot to ask you, you followed the recipe to a T? How's the texture of the cake? Mine was mushy.

That day I 屁股癢咯。 Always see Rachel and Nigella beat egg white like so easy .. then I lazy to wash the KA....but i regret later, cos it is 4 whites. Too late then.

Base on your possibilites, I think only 1 is likely, cos I sure did not over beat the whites since it is still foam like and did not even reach stiff peak.

I also did not wait too long unless the time taken to mix the whites into the batter is also counted.

Anyway, I am keen to try again, but cannot be so near, else kids may not eat.

You said yours is mushy and you will want to increase flour or reduce milk the next time u try, so I worried and thus i reduce to 185g of flour. I think the texture is just nice, not mushy, very soft.

btw, Blessed Homemaker, how long did u actually spent mixing the whites into the batter? Maybe I can use it as a rough guide.

Sherlyn
I have encountered such problems where the bottom of my cake is kuih like. Accordingly to BH, no.2 possiblity is normally my problem. Hence, beating egg whites is really a challenge if is beatean by hand. Nwadays I use electric mixer to do the job.

Esther .. next time I will use the mixer ... arms really ache. hehe