This is actually the third try on pandan chiffon cake. First time
on a square tray ended with malay kueh. 2nd time is a happy
"sort of successful" pandan chiffon baked on a tube pan, and
today, its so sad .......

I used the full recipe(and even the pandan paste is not omited),
intending to make the remainders into cupcakes since mine is
not a 9 inch tube pan.

Happy churning out the egg yoke mixture, then follow by
beating the egg whites. This part is known to be very difficult
esp for newbies like me. I stopped the mixer so many times,
chking if its the right state. In the end, I stopped when I see
that the beaten egg whites are somewhat quite stiff.

I fold a little of the beaten egg whites into the egg yolk mixture
first, then a little again, then I pour the remain of the egg white
mixture and start trying to blend them while folding gently.

I filled the tube pan up to about two third full then pop it into
the oven. Half way through the baking, the top starts to crack.
I prepared the aluminium foil and tent it so that the top will
notget burnt.

It rose beautifully and after ard an hour and 10 minutes, I
finally took it out. The satay stick did not come out clean
after 45 minutes, so I carry on baking even after the stated
baking time.

I admire the cake for a very short while then invert it. Perhaps
its a small batter, so the cake did not rise beyond the centre
tube. After a while, I went to check on the cake and I saw the
ugly centre. The cake has sunk drastically in the centre.
Could it be due to egg whites not beaten enough?
Could it be due to too much folding?
Could it be due to sifting of flour (I only sift into the mixture,
meaning only one sift)?
Could it be the knock on top of the oven (I dropped my whisk
there)?
After reading through the recipe's owner's QnA (comments),
I think any of the above could have contributed to the sunken
centre. Could also be that my cake is not really cook through.

Anyway, will try it again since I love chiffon cake. My kids
enjoy the cake this time, and I think its not difficult to finish
the remaining quarter of the cake tomorrow.

Now, I have to be contented with the beautiful skin of my
sunken pandan chiffon cake. 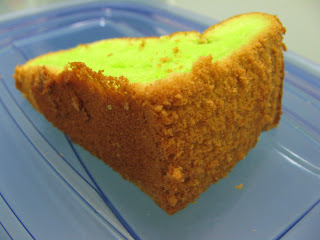 I made a sunken chiffon cake recently too! For my case, I;m quite sure it is the oven temperature...the cake was baked at 150degC instead of the required 170degC...even after adjusting the temperature setting to 200degC the thermometer still registered as 150degC :(

My previous chiffon cakes all failed too. They all have sunken top. So it's due to oven temp. I always thought it's because of the egg whites. But I don't have a thermometer to test it. :(

ok .. thanks Happy homebaker for the tip .. perhaps I will try to make sure the temperature is right first the next time I bake it.

small small baker, go get an oven thermometer? I have one, but I still do not quite trust it. The temperature sometimes differ at different baking sessions even thou I set my oven at the same setting. :-(