Egg tarts after a long break

My kids requested for egg tarts. Its has been a long time since
I bake them because my mother usually is the one who makes.
My mother doesn't come over to help me now, so I have to do
the job myself this time.

I have used my mother's amended recipe. Ingredients wise are
the same, except that she adjusted the recipe to be able to
produce 18 egg tarts instead of the usual 10.

I am still too lazy to wash my mixer, so i hand cream my butter
and sugar. So tiring! I stopped to rest many times before I am
satisfied with my batter. My mum came over while I am
baking the first batch of 9 egg tarts, and she carried on with the
2nd batch while I cook dinner.

I can't remember during the first time that I bake, did my
egg custard bloat up. Anyway, all my mum's and this time's
bloated high up and of cos sink back when the tarts are out
from the oven. I also noticed that the crust are very soft
after a day. It should be due to the flour used. Perhaps I
should change to use plain flour instead of cake flour.

The first picture shows the first batch and 2nd showed the
2nd batch. 2nd batch has sunken centres. Perhaps the first
batch isn't baked for long enough, so the rise of egg custard
is not high, thus doesn't sink as low. Anyway, they are as
tasty and were eaten all up in no time. Infact, the 2nd day
she baked another batch for my cousin who came by to
taste the egg tarts (and of cos take some home). 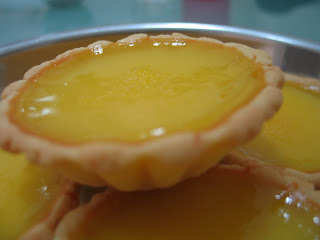 Not sure what is wrong with the bubbled centre. 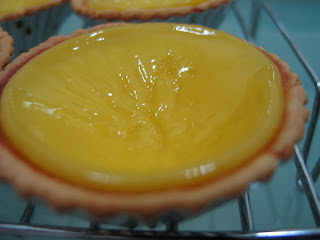